Alquerque is an old game which began in Europe when invading armies brought the game from the Middle East to Spain during the tenth century. It is similar to checkers, which probably developed when someone decided to play Alquerque on a chess board.

Equipment: Board (see below); 24 counters (12 per player in two different colours, usually black and white or black and red)

Aim: To capture all your opponent's pieces.

1. Draw a board with five vertical lines, five horizontal lines and six diagonal lines. Set it up as shown below. One player takes a black counter in one fist and a white counter in the other. The opposing player chooses a fist. The player with the black counter goes first. The two counters are replaced on the board. 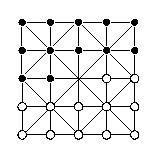 2. Players move one counter to any adjacent empty point, along any line. For example, on the first move the black player can move any one of four counters to the centre, vacant point.

3. An opponent's counter can be captured by jumping over it in a straight line to a vacant point immediately beyond the counter, just like in checkers. Captured counters are removed from the board. Capturing is compulsory - you must capture an opponent's piece if there is an opportunity to do so. If you fail to do so, your piece can be removed from the board. If there are two or more pieces you could capture, you can choose which one you will take. It is also possible to capture more than one counter in one turn, as long as there is a vacant point between the counters, even if the counters are not in a straight line.

4. The winner is the player who captures all of their opponent's counters.

Link from Alquerque to more Board Games