Ball in the Air

Ball in the Air is a popular indoor or outdoor game played in Argentina. You will need a playing area about 24 metres (27 yards) square. Set up a boundary line along one side of the field.

No. of players: Large groups. (Traditionally there are 30 players in two teams of 15, but you could have any number of players.)

Equipment: One volleyball or basketball

Aim: To be the team that makes the most passes.

1. To play Ball in the Air, players divide into two teams of equal size and ability. The members in Team A form a line along the boundary. Team B members form into a circle at the other end of the field with approximately one metre (one yard) between each player.

2. When the signal is given the members of Team A run as quickly as possible around Team B and back to the boundary line. 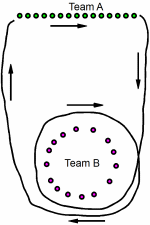 4. After completing one loop (every player running completely around Team B), Team A members race back to the boundary line. When the last player crosses over the line they all yell out "Stop!'

5. Team B completes the pass it is doing and then stops passing the ball. They record the number of passes they completed.

7. The winner is the team that makes the most passes.

Source: Adapted from "Games Around the World" UNICEF New York

Link from Ball in the Air to more Worldwide Games