Battleships is one of the most popular pen and paper games for two players. It is believed to have been developed by British prisoners-of-war during the First World War. It is available as a commercial game and even as an electronic version of the game, but it is easy to set up and play at home.

Equipment: Paper and pen/pencil per player.

1. Each player will need to draw two ten-by-ten grids on their paper This is easier if you use graph paper. The squares across the top are labeled A, B, C, D E, F, G, H, I, J. The squares down the side are labeled 1, 2, 3, 4, 5, 6, 7, 8, 9, 10. One of the two grids is labeled Home Fleet while the other grid is labeled Enemy Fleet. (If you would like to print a set of labeled grids, ready to play, click here. A new window will open.) You will need to keep your sheet hidden from your opponent, possibly by putting it behind a large book which is standing up.

2. Each player then positions their Home Fleet anywhere on the grid, as long as there is at least one blank square between ships.

They can be horizontal or vertical, but not diagonal.

A sample Home Fleet grid is shown below. 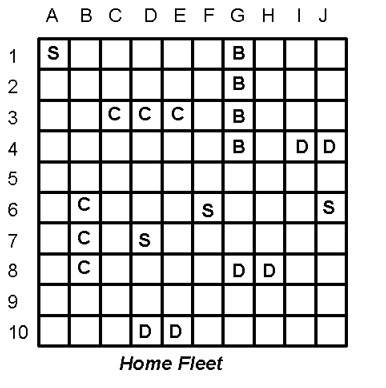 3. Once both players have drawn their Home Fleet, they toss a coin to decide who will go first (Player One). Player One then calls out the co-ordinates of any three squares that he is attacking (for example, D3, I7, A2). Player Two puts a cross on these squares on her Home Fleet grid. If any of them hit part of her fleet, she says, "Hit. Cruiser on D3" (for example). Player One then marks his Enemy Fleet grid with a "C" (for cruiser) on D3 and a cross (signifying a missed shot) on I7 and A2.

4. Players take alternate turns firing a three-shot barrage. A ship is sunk when all of its squares are hit. Submarines only require one hit while Cruisers need three hits to be sunk, and so on. When a player's ship is sunk they say, "Hit and sunk on E9".

5. The first player to destroy all of their opponent's ships wins the game.

Link from Battleships to more Pen and Paper Games