Shepherds and Wolf (also known as Cows and Leopards) is an unusual board game for two players since each player has a different number of counters and different aims to win. The game originally came from Sri Lanka. Although the rules are simple, it can be quite difficult to win.

Equipment: Chess (or checkers or draughts) board; Four counters of one colour and one counter of another colour.

Aim: Each player has a different aim. The four shepherds win if they can trap the wolf, while the wolf aims to break past the shepherds and reach the sheepfold. 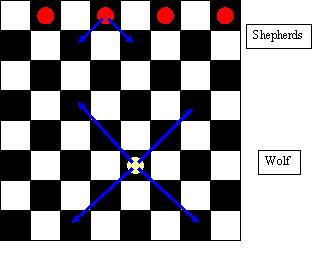 2. The Shepherds win the game if they can trap the wolf so that it cannot make a valid move (that is, two diagonal steps in any direction). The Wolf wins if it can get past the Shepherds and reach their end of the board.

3. Players then swap roles and ends.