Achi is a simple board game which is popular in West African countries, particularly Ghana. A board can be easily drawn on a piece of paper or cardboard, or can be scratched in the dust with some pebbles as counters.

Equipment: Board; eight counters (four black and four white, or other colours)

Aim: To be the first player to get three counters in a row.

1. One player holds a black counter in one fist and a white counter in the other fist. The opposing player chooses one hand. Whoever gets the black counter uses that colour and starts first. 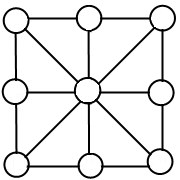 2. Each player takes it in turn to put one counter on any of the nine points on the board. They should try to get three of their counters in a row (vertical, horizontal or diagonal), while preventing their opponent from doing the same.

3. Once all eight counters are on the board (assuming no player got three in a row), there should be only one point vacant. Players take turns to move one of their counters adjacent to the vacant point along a line onto that point. Play continues until one player wins by getting three counters in a row.

4. For variations of this game, see Nine Holes and Gobang.