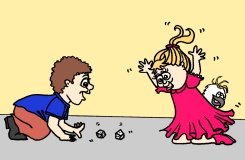 Family dice games are lots of fun
with only a few dice and counters.
There are dice games for young children
and the whole family.

Family dice games can provide hours of fun with only a few dice and some counters. Dice games differ from board games (which also use dice) because board games only use the dice to move a counter around the board. However, the games listed below use the dice themselves as the focus of the game. By the way, one 'dice' is actually called a die - the plural of die is dice.

In fact, dice games are some of our family's favourite games. We love playing Pig. Dice games are so cheap and portable - even compared to card games. They are great for teaching younger children to count, and they won't even know it because they are having so much fun. We often feature a variety of dice games in our family game nights.

Even if you don't have any dice, you can make some using common household items. For example; you could draw spots on a sugar cube, scratch some lines on a pencil and roll it sideways, make a dice spinner with a six-sided piece of card with numbers around the sides and a pencil through the middle, or you could divide a sheet of paper into six equal numbered spaces and throw an object onto the paper.

Using just a few dice (most games use only one die or a pair of dice although some use up to five dice) it is possible to play many games, although some may need pen and paper or a set of counters for scoring. There are games for young children and the whole family.

Games suitable for adults and older children include:

Blackjack Dice - Just like Blackjack card game but with dice!

General - A popular game in Puerto Rica, similar to Yacht

Yacht - Hours of fun with five dice and some score sheets

Games suitable for all ages include:

Pig - One of my family's favourite dice games!

Shut the Box - Popular in northern France, you can buy a game set or use two normal dice and draw your own board