Beetle is one of those perennial favourite games after meals or at reunions or get-togethers. Players sit around a table. An adult or older child may need to help young children.

Equipment: One piece of paper and pen/pencil per player and one die per group (Note: The plural of die is dice.)

Aim: To be the first player to draw a complete beetle by throwing the correct numbers on a die.

1. Each player takes turns to throw the die once. Depending on the number shown on the die, the player can add a different part to their drawing. 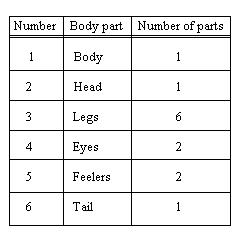 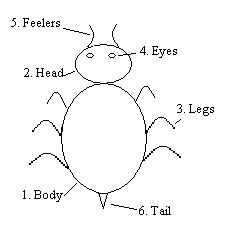 4. If a player has already completed one part of their drawing and throw that number again, they forfeit their turn. For example, if they have already drawn both eyes and then throw another 'four', they miss that turn.

5. Of course, players can draw their pictures with much more artistic skill if they desire, as long as they have the right number of body parts.

6. The first player to complete their drawing shouts 'Beetle!' and wins the game.

7. For a variation of this game, see Monster.