All Fives (also known as Muggins or Fives Up) is slightly different to the 'normal' dominoes games of Block Dominoes or Draw Dominoes since the aim is to accumulate points rather than get rid of all your tiles. It is particularly popular in the United States.

Equipment: One standard set of double-six dominoes; pen and paper (for scoring)

Aim: To be the first player to score 150 points.

1. Dominoes are placed face down in the centre of the table and moved around to shuffle them. Each player chooses one domino. The player with the highest number of spots in total on their tile goes first. Replace the dominoes and shuffle them again.

2. Each player draws five dominoes and looks at them without letting anyone else see them. Any spare tiles are moved to the side of the table and become the Boneyard.

3. The first player places any tile in the middle of the table to start the layout. If the ends of the tile add up to five or ten, they score one point, otherwise they score zero.

4. The second player places a tile to match either end of the layout. If the total of the spots on both ends add to a multiple of five (that is; 5, 10, 15, 20), they also score one point. If the player is unwilling or unable to place a tile on the layout, they could choose to pick up one tile from the Boneyard. (You cannot play the Boneyard tile until your next turn.) 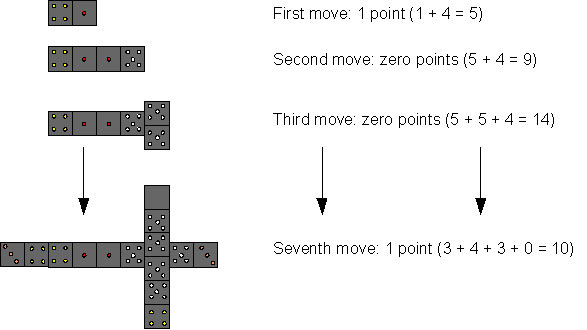 6. Play continues using all four ends of the layout until one player gets rid of all their tiles or the game is blocked so no player can place any more tiles. If at any stage a player overlooks points they could have scored, any other player can call out "Muggins!" and score their point(s).

7. The player who gets rid of all their dominoes wins that round and scores the total of all their opponents' domino spots.

8. Play continues with subsequent rounds. The overall winner is the first player to score over 150 points.

Alternative Scoring
(a) Players may agree to go to 200 points for the overall winner.

(b) All Fives can also be scored with one point if the spots add to five; two points if they add to ten; three points for fifteen, and so on. However, the winner for that round scores one fifth (rounded down) of the total spots for their opponents' tiles. For example, if the total was 23, they would score 4 points since 23 ÷ 5 = 4.6 which is rounded down to 4.

(d) Fives and Threes is played as normal All Fives except that one point is given for multiples of three or five, and two points if it is a multiple of three and five (that is 15).

Link from All Fives to more Tile Games