Cyprus (which is also known as Sebastopol) is a variation of Draw Dominoes which suits large groups. It requires a set of double-nine dominoes (55 tiles) rather than the normal double-six set (which only has 28 tiles). A set of double-nine dominoes should be readily available from most stores which sell good quality games. (See below for the variation Fortress which is a four player game similar to Cyprus and uses a standard double-six set)

Equipment: One set of 55 double-nine dominoes

Aim: To be the first player to get rid of all their dominoes.

1. Tiles are placed face down in the centre of the table and moved around to mix them up. Players choose their tiles at random, depending on how many people are playing.

2. The player with the double nine starts the game, placing it face up in the centre of the table to start the layout. If no player has the double-nine, all the tiles are reshuffled and drawn again.

3. The next player on the left puts a tile which matches (on one end) the double nine and so on around the table. Play continues around the table, with each player putting a tile to the central double nine tile until there are eight tiles surrounding it in the shape of a star. Any player without a matching tile draws a tile from the Boneyard (if there are any) and can play it immediately, if possible. 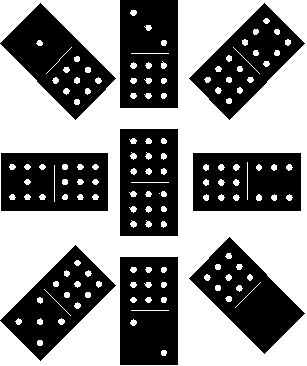 4. After the star is completed, matching tiles can be added to any star point of the layout, but only one tile is added per turn. If a player is unable or unwilling to play a tile, they must pick up one or more tiles from the Boneyard, either until they are willing or able to add a tile to the layout. If a player looks at any tile in the Boneyard, they must add that tile to their hand; they cannot choose and discard tiles. If there are no more tiles in the Boneyard, players must then miss a turn if they are unable to play a matching tile to either end of the layout.

6. The overall winner of Cyprus is the first player to reach 200 points or more.

Variation: Fortress is a four player game similar to Cyprus which uses a standard double-six set. Players choose seven tiles each. There is no Boneyard. The player with the double six goes first and players only need to make a four way cross rather than an eight way star before any other tiles can be played.