Bingo is a later development of the original game of Lotto. It is a game of chance, needing no skill to win each round, so it is suitable for all ages (as long as a child can recognise written numbers). However, unlike Lotto, there is some strategy in increasing your score and winning the overall game.

Equipment: Set of bingo cards (one card per player); Set of numbered squares (1-75); A bag (or similar) to hold the squares. (If you would like to print a set of cards and squares, which will open in a new window, click here.)

Aim: To be the first player to mark off all the numbers on their card.

Each player will need a separate card, which can be made at home. Each card is divided into five rows of five squares. The first column can contain only numbers from 1 to 15, the second column (16-30) and so on until the final column contains only numbers from 61 to 75. Each card will have twenty five numbers at random. Make sure that no two cards have the same combination of numbers. You will also need seventy five small squares, with each number from 1 to 75 on a separate square. (If you would like to print a set of cards and squares, which will open in a new window, click here.) 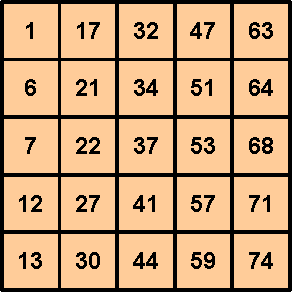 1. One player is chosen to be the caller. The caller places all the numbered squares in a bag or box and shakes them up, before withdrawing one square and calling out the number. Any player with that number on their card marks it with a cross. (If you use a pencil, you may be able to erase the marks and re-use the card later.) The square is placed aside until the end of this round.

2. The first player to mark off a row of five numbers (either vertical, horizontal or diagonal) on their card calls out "Bingo!" and wins that round. (The squares which were put aside can be used to check they have not cheated.) The winning player scores one point. However, many players will not call out, but will attempt to win a Blackout, where all the squares on their board are covered. A Blackout is worth ten points.

4. The overall winner is the first player to reach 30 points, or the player with the highest score at a given time limit.