Klondike is known to many computer users as 'Solitaire' and has been known for years as 'Patience'. It is an easy but addictive card game for one player which combines luck and good judgment. For many card players this is the only real game for one player. It has been said that if you are ever lost, you only need a pack of cards to be rescued. Simply sit down and start playing a game of Klondike. Soon, someone will look over your shoulder and say, "Why don't you put the red seven on the black eight?"

Age: 8+ (as soon as a child can recognise numbers and card suits)

Equipment: One standard deck of cards (remove the jokers)

Aim: To release all 52 cards in order, according to their suits.

1. Klondike begins by building a 'tableau'. Shuffle the deck and place a row of seven cards to begin the tableau, the first card face up and the remainder face down. Then place six cards on the second row of the tableau and so on, as shown in the diagram below. After the tableau is built, the remaining cards are placed in a stock pile, face down, below the tableau. Leave enough room above the tableau to have four build-up piles, one for each suit. 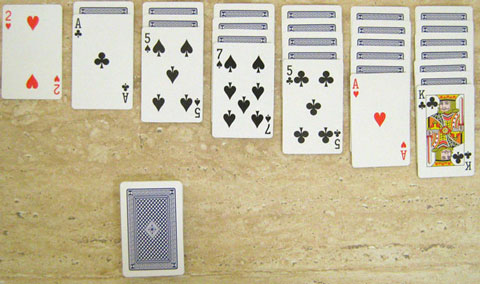 2. The eventual aim of Klondike is to remove every card from the tableau and stock pile to the build-up piles in order (Aces are low). There are a number of rules for moving cards.


(a) Only face up cards can be moved.

(b) Aces can be moved immediately from the tableau to the four build-up piles.

(d) Any face up card can be moved to another pile in the tableau to create a sequence of alternating colour cards in numerical order, with lower value cards on top of higher value cards. For example, 4♦ can be placed on either 5♣ or 5♠.

(f) As you move a card from one pile, the card underneath is turned face up.

(g) If all the cards have been removed from a pile, a King (and any cards on it in sequence) can be moved into the blank space. No other card can fill a blank space.

(h) Continue moving cards according to the rules above until no more cards can be moved. 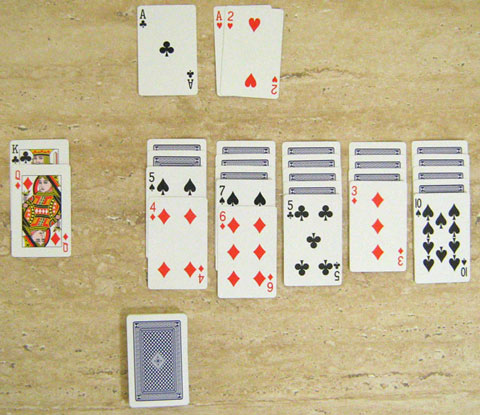 Note: The diagram has been based on the original tableau in the top diagram after all possible moves have been made. This has been staged to show the range of moves available. A real game of Klondike is unlikely to have so many possible moves. See if you can work out all the moves which were made.

3. Once all possible moves have been taken, pick up the stock pile and turn over the top three cards together on the table. If possible, the top card can be moved to the tableau as part of a sequence (or onto a blank pile if it is a 'King') or placed on top of a build-up pile. This may open up more moves either moving cards within the tableau or onto the build-up piles. The second card in the stock pile can also be used, along with the third card, if appropriate moves exist.

5. Play continues until all the cards are on the four build-up piles (win) or there are no more moves available (lose).

Variations to Klondike:
(a) To make an easier game, you could allow the stock pile to be shuffled, or choose to deal one card at a time from the stock pile rather than three cards.
(b) Children may find it easier if they are allowed to break up a sequence and move individual cards. They may also find it easier to move cards from the build-up piles back to the tableau.
(c) To make a harder game, the stock pile cannot be re-used must only be played once.
(d) Another harder game is to only play suit-on-suit in the tableau (for example, 8♥ can only be played on 9♥).