Reversi is a strategy game for two players which was invented in the late 19th century. It has been revived recently as Othello™ but can be made at home by using a standard draughts/chess board and making 64 cardboard counters (to fit on each of the 64 squares of the board). Each counter is coloured black on one side and white (or other colours, if you prefer) on the opposite side. Alternatively, you can stick two coloured plastic counters together (you will need 64 of each colour) or you can use 64 plastic counters and stick or draw a symbol (e.g. star) on one face.

Age: Not suitable for young children due to complex strategies.

64 double sided counters (black on one side, white on the other).

Aim: To be the player with the most pieces of their colour face up at the end of the game.

1. Each player takes 30 counters and chooses a colour. The remaining four counters are placed in the middle of the board as shown. 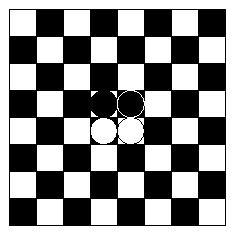 2. Player One (white) places one of their counters (with their colour uppermost) in a square adjacent to the counters already on the board. They place their counter next to one of the opposite colour to trap the other player's counter between two counters of their own colour. 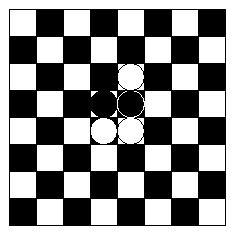 3. Any counters belonging to Player Two which are trapped are turned over so they now have Player One's colour. 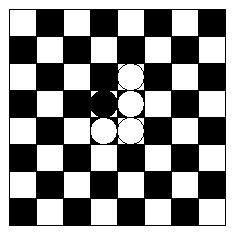 4. Player Two (black) now has a turn, repeating steps 2 and 3. Counters must be placed to trap at least one of your opponent's counters. If you cannot trap any of their counters, you lose your turn. Any trapped counters are turned over, even if they have been turned over already. 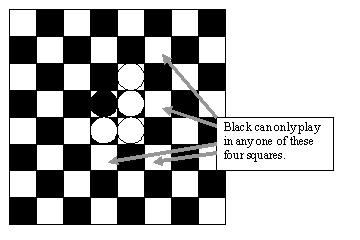 5. Players take turns, until all the counters are on the board.

6. It is possible to trap your opponent's counters in multiple directions, even diagonally. 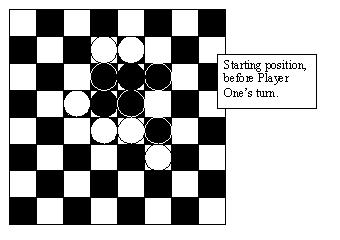 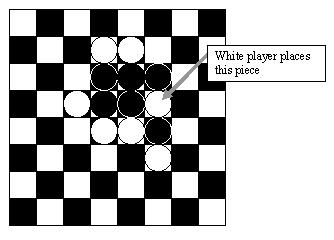 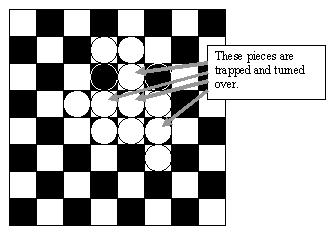 7. The winning player of Reversi is the one with the most counters of their colour when all the squares are filled with counters.

Hint: It is helpful to gain control of the squares at the edge of the board and particularly the corner squares, since they are less likely to be trapped. Take care not to allow your opponent to control these squares, if possible.

Link from Reversi to more Board Games