Equipment: None (for most games).

Aim: The aim varies with the game. 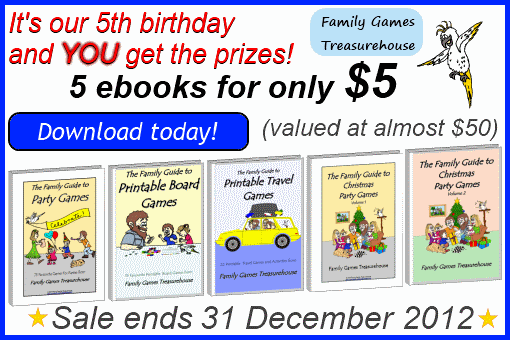 Seeking Games are also known as hide and seek or hunting games. The aim is to find one or more objects that are hidden. A large outdoor space with lots of hiding places is ideal for these games.

Kick the Can is a seeking game similar to Prisoner except that a metal can is placed at the prison and players must kick the can to release a prisoner.

Treasure Hunt Trail. This seeking game needs a bit of preparation before the game. An adult writes out a series of clues which the players must follow to find the treasure. Players can act individually or it may be better to allocate pairs or teams, especially if there are younger and older participants. They are given the first clue (for example, "Under the front doormat") which tells them where the second clue is hidden, and so on. You would need to make sure the clues are suitable for the age group of the players. Older players may be given harder instructions which can be interpreted in different ways. For example, the clue may say "Beside the gate", without specifying which particular gate is being referred to. The clues may cover a small area (around the house, for example) or a much larger area (around town). Each clue location should have a enough copies of the clues for each player to be able to take with them to the next location, in case they forget the clue or do not follow it properly. There should also be adult supervisors to make sure the players are safe.

Cryptic Clues is similar to Treasure Hunt Trail except the clues are either cryptic or written in code. Players must work out the clue before they can find the next clue. Some example of cryptic clues are:


"On top of something round and black" (A car tyre)
"I am near a sandy location" (A beach or sandpit)
"Woof! Munch" (The dog's food bowl)

Or you could write the clues using any simple (or complex) code. For example, you could use a reverse alphabet (with A=Z, B=Y, C=X, etc.) or a number for each letter (A=1, B=2, C=3, etc). Make sure the cryptic or coded clues are suitable for the age group.

Lolly Hunt. Players either close their eyes or are involved in another activity while an adult hides enough wrapped lollies around the area for every player to get an equal amount (say, 10 each). On the command "Go!", players begin to search for the lollies. You can choose to let every player collect as many lollies as they can find and then distribute them equally at the end, or you can tell the players to only collect as many as they should (10 each) and then to help other players find their allocations. You could substitute small tokens or toys if you prefer, instead of lollies.

Return to Top of Seeking Games


Link from our Seeking Games page to our Home page