This Sample Chess Game introduces a beginning chess player to algebraic chess notation and uses it to guide you step-by-step graphically through a short game. If you don't know how to play chess, Basic Chess Rules explains the rules of chess for beginners.

No. of players: 2 players

Algebraic Chess Notation is used internationally to describe the moves in a chess game. There are other forms of chess notation, but this is the most common. The Sample Chess Game below uses this notation.

1. Each square on a chess board is given a unique identification. The vertical files are named a to h from left to right. The horizontal ranks are numbered 1 to 8 from bottom to top. These designations are always given from the viewpoint of the White player, and diagrams of the board are always shown with the White player at the bottom. 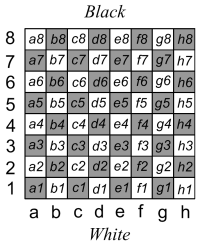 2. Chess pieces are identified by an upper case letter:

Pawns are not given a letter. They are recognised by their moves since they have such limited moves available.

4. The moves played by each player in one turn are described as a pair, with White's move first. For example, 3. Ng4 Bd3 shows that on the third pair of moves in the game, White moved a Knight to square g4 followed by the black Bishop to square d3. A series of moves can be written as vertical pairs or can be written horizontally. For example;

If Black's move is described alone at any time, this is shown by replacing white's move with an ellipses "…". For example, 4. … Rg7

5. If there is any confusion concerning which piece is being described, the piece's letter is followed by the file and/or rank it left. For example, Ngf3 shows the Knight that was on file g has moved to f3, while Nhf3 would show that the Knight that was on file h has moved to f3. If the file is not enough to distinguish between two pieces, the rank of the piece is given instead. If you have three or more identical pieces (after a pawn promotion), you may need to use both file and rank to uniquely describe a piece.

6. If a piece is captured, the letter for the capturing piece is followed by an "x" (usually) or a ":" and the square where the capture occurs. For example, Nxd2 shows that a Knight has captured the piece that was on square d2. An en passant capture is usually shown by adding the letters "e.p." after the move.

7. A pawn promotion is shown by '=' or by simply naming the new piece. For example, a black pawn that reaches square c1 and is promoted to a Queen could be shown by c1Q or c1=Q. Other variations you may see for a pawn promotion are c1 (Q) or c1/Q

Return to top of page

Now that you have learned Algebraic Chess Notation you should be able to follow the sample chess game shown below.

This sample chess game was played between Paul Morphy and his two opponents, the Duke of Brunswick and Count Isouard, in 1858 during a performance of The Barber of Seville at the Paris Opera.

1. e4 e5
Both players have moved their pawns to oppose each other. 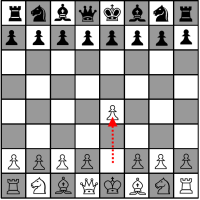 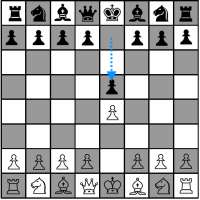 2. Nf3 d6
White has moved his Knight while Black moved a pawn one square. 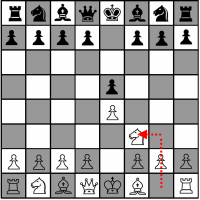 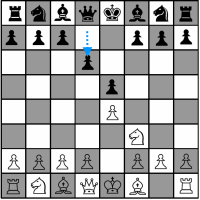 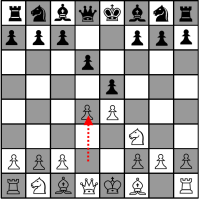 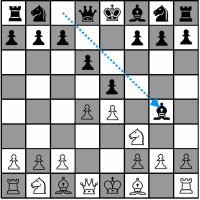 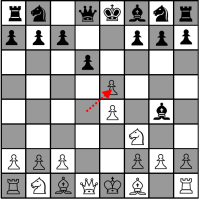 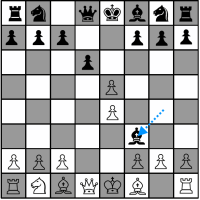 6. Bc4 Nf6
White moves his bishop and Black moves his Knight.

8. Nc3 c6
White moves his Knight while Black moves a pawn one square.

9. Bg5 b5
White moved his bishop while Black moved a pawn two squares.

10. Nxb5 c6xb5
White captures a pawn with his Knight and immediately Black captures the Knight with a pawn.

11. Bxb5+ Nd7
White captures the pawn with his Bishop and puts the black King in check (shown by the +), so Black moves his Knight to block the bishop.

15. Bxd7+ Nxd7
White captures the black Rook with his Bishop (putting the King in check) and Black immediately captures the Bishop with his Knight.

16. Qb8+ Nxb8
White moves his Queen and puts the black King in check again, but Black captures the Queen with his Knight.

17. Rd8#
White moves his Rook and checkmates the black King.

Return to top of page

Although many of White's moves in this sample chess game may seem strange to a beginning chess player (such as intentionally losing a Queen) you should be able to see that there was a great deal of strategy and tactics involved. No wonder Paul Morphy was considered the unofficial World Chess Champion of his time and could easily win against two opponents working together. For more historical games using Algebraic Chess Notation, see ChessGames.com

The sample chess game shown above should convince you that you need to learn and develop good strategies. These strategies can be used throughout a game. Many common opening moves have been given names (such as the Philidor Defence or the Evans Gambit). As you develop your skills, you should learn opening, middle and end game strategies. A good resource is Expert-Chess-Strategies.com

Link from Sample Chess Game to more Board Games