Worm is a simple pen and paper game, similar to Boxes. Each player tries to extend a line from dot to dot until finally one player is prevented from extending it any more. Very simple, but it can be quite difficult to manipulate the line to your advantage so that you win.

Equipment: One sheet of paper; One pen/pencil per player.

Aim: To be the last player to make a valid move.

One player will need to draw a grid by plotting ten equally spaced dots on a sheet of paper, and then repeating the pattern downwards until there are ten rows of ten dots. If you prefer, you can click here to open a new window with two ten-by-ten grids ready for printing.

1. Players toss a coin to see who will go first. Player One draws a straight line (either vertical or horizontal, but not diagonal) between any two adjacent dots on the grid. Player One also draws a circle on one end of the line to mark the worm's head.

2. Player Two then joins the other end of the line (the tail) to another adjacent dot. Players take it in turns to continue drawing lines from the tail to any dot next to it, with the aim of forcing the other player(s) into a position where they cannot make a valid move. That is, their opponent(s) cannot draw a line to any other nearby, vacant dot.

The diagram below shows a finished game. 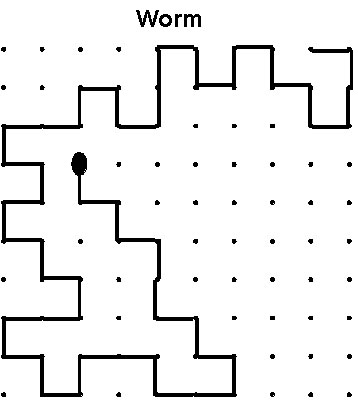 3. The winner is the last player to draw a valid line extending the tail.

Variation: Instead of drawing a circle for the head, the line can be extended from either end until both ends are blocked. 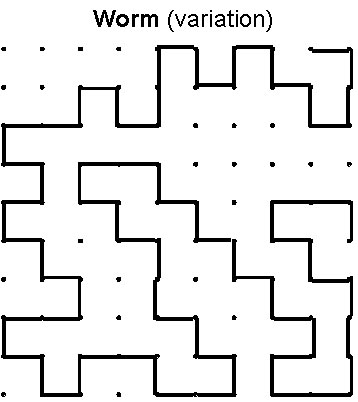 Link from Worm to more Pen and Paper Games